Alumnus Begins New Career with Service Dog at Side 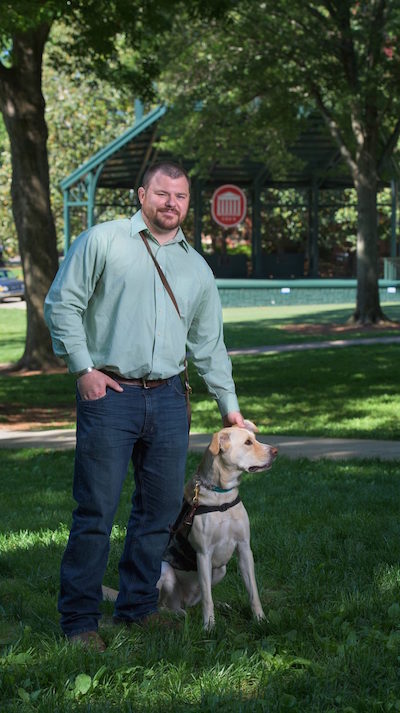 UM graduate student Ben Stepp and service dog Arliegh have attended every class together since 2014. Photo by Robert Jordan/UM Communications

When graduate student Ben Stepp walks across the stage during the University of Mississippi’s Commencement ceremonies Saturday (May 14), he will do so in the company of his canine companion, Arliegh, a service dog who rarely leaves his side.

A retired U.S. Army staff sergeant and an infantry veteran of the Iraq War, Stepp, 36, is set to receive his third UM diploma—a master’s degree in community and mental health counseling. But what makes this accomplishment even more thought-provoking is that Arliegh, a nearly 3-year-old Labrador retriever mix, has attended virtually every class alongside her owner since 2014.

“(Arliegh) is a highly trained medical device,” explained Stepp (BA economics ’09 MA criminal justice ’11) , a husband and father of two. “When my heart rate gets elevated, she can sense it and places her paw or head on my leg for me to pet her. You might see me petting her a lot on graduation day.”

Stepp and Arliegh are preparing to begin a new career in which Stepp plans to eventually become a Licensed Professional Counselor, hoping to specialize in counseling veterans adjusting to life after military service.

As a service dog, Arliegh helps Stepp manage anxiety related to the effects of PTSD, one of two wounds the Fairbanks, Alaska, native received during his 15 years of military service. Stepp’s other injury is a still-bothersome grenade wound to his right ankle, which resulted in long-term pain from reflex sympathetic dystrophy, or RSD, a type of nerve damage that causes a burning pain in the injured area among other symptoms.

Stepp joined the LOU community in 2006 when he returned from his service in Iraq. While deployed, first in 2003 then later during parts of 2004 and 2005, he served as the leader of an infantry fire team, a group of four to five soldiers.

After transferring from the regular Army into the Mississippi Army National Guard, Stepp enrolled in undergraduate courses at UM with a plan to finish a bachelor’s degree in economics—which he had started at the University of North Carolina at Pembroke—and return to active duty as an officer.

However, Stepp faced challenges he did not expect as a tried to “normalize” into life as a college student and war veteran.

“I was in a lot of denial about my problems at the time,” he recalled. “I was easily agitated, easily set off. I had nightmares and flashbacks.”

At the urging of UM Army ROTC faculty , Stepp began seeing a therapist on campus and later at the VA office in Memphis, Tennessee. It was an important and necessary decision for Stepp, but it was also a decision that set his life in a new direction.

“I was then medically disqualified from being an officer,” he said. “They said I could stay as an enlisted man, but I couldn’t be an officer.”

This was a hard blow to Stepp, who had first joined the military at age 17 with the consent of his mother. But, after refocusing his efforts on academic pursuits, Stepp earned a bachelor’s degree in economics in 2009 and a master’s degree in criminal justice in 2011, while working as a University Police Department officer, a position he held from 2007 to 2013.

The same year he earned his bachelor’s degree, Stepp also married his wife, Erin. The couple welcomed their first child in 2010 and carved out a life together in Oxford.

However, Stepp still had personal battles to fight. He was becoming increasingly frustrated with the care offered through the VA. He struggled privately with chronic anxiety and longed for therapists who better understood issues faced by veterans. And, there was also his lingering ankle wound, which he continued to manage with regular nerve block injections and opiates prescribed by VA physicians.

“I was tired of being treated like a science experiment,” Stepp said. I wasn’t happy with the way any of us vets were being treated. So I decided to seek out my own treatment.”

Soon after in 2013, Stepp resigned from UPD, a position he felt passionately about but could no longer complete to the best of his abilities due to personal difficulties.

“I was in a lot of pain, physical pain,” he said. “I thought I was doing a good job of covering it up. But it all finally kinda came to a boil, I guess, and I decided that the best thing for me was to really get help and ‘get right.’”

After seeking out a pain specialist, Stepp began to wean off opiates and underwent new treatments to manage his pain. He wears a device that allows him to walk more freely without help from drugs.

He also continued seeing local counselors, including Marc Showalter, an assistant professor of counselor education at the UM School of Education. It was during this time that Showalter approached Stepp about a potential career move into counseling. It was one of multiple ideas he put in front of Stepp as he planned to the future.

“What I saw in Ben early on was perseverance,” Showalter said. “I have seen him grow and overcome so many difficulties, and always with the desire to help people. Even as he was trying to find his own way, I always heard from him that he wanted to find some way to help others, especially veterans. So I put the idea of becoming a counselor in front of him.”

Before beginning UM’s Master of Education program in counseling in 2014, Stepp connected with Arliegh through the K9s for Warriors organization in Pontre Vedra, Florida. Through his experience with the Wounded Warriors Project, he’d become aware of other veterans with similar backgrounds who use service dogs to help manage anxiety related to trauma.

After some soul-searching, Stepp decided to pursue using a service dog for his own anxiety. The application process took about a year.

“(Having a service dog) was hard at first,” Stepp said. “For a lot of vets … you sometimes feel like you are always being watched and the need to make sure there is no one trying to hurt you. Then, once you get a dog, everyone actually is always looking at you. Well, actually they are mostly looking at the dog. But you feel like ‘Oh, all eyes are on me.’ That was a struggle at first.”

K9s for Warriors supports veterans by connecting them with specially trained service dogs that help manage and address anxiety related to stress. The program brings in former warriors for an intensive three-week orientation and training period, during which they learn about working with service dogs. Most service dogs are rescued from shelters and trained for months before being paired with a veteran.

“The saying is, ‘We rescue them so they can rescue us,’” Stepp said.

Like any dog, Arliegh can be playful and enjoys attention from others. But when her service vest is on, Arliegh is at work. As a rule of thumb, it’s OK pet and play with Arliegh when she is not wearing her vest. Otherwise, she is on duty.

Besides helping lower anxiety, service dogs can help individuals identify “triggers,” the sights, sounds or smells that can cause panic or flashbacks among individuals recovering from PTSD. Having a service dog gives those who need it a specialized tool to identify sources of stress and learn to process them in a productive way.

Throughout Stepp’s latest experience in graduate school, Arliegh has been a constant companion as he worked as a full-time student. The program is intensive and rigorous, requiring students to complete year-round, full-time coursework over two years.

During this time, Stepp has gained experiences through internships, including one at Oxford Counseling Center, where he will begin working full time following graduation. He hopes to finish the requirements to become a Licensed Professional Counselor within the next year.

“You know, for me, (becoming a counselor) isn’t very different from a lot of my experiences,” Stepp said. “When you’re a squad leader, you have people who always look to you. You become their dad, brother, friend, teacher or even banker. Everyone needs something different.

“As a police officer, you find people who just need some help from someone, even when it’s 2 a.m. and a confused student desperately needs someone to speak to and you are the first one they find. I did these things for such a long time that when I decided to become a counselor, it wasn’t the huge leap you might imagine.”