Freshman year brought adjustments, fond memories for one of the university’s youngest students ever 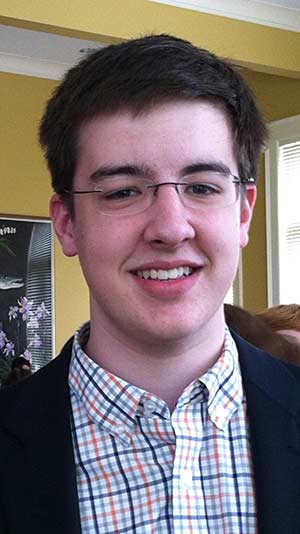 Andrew Hayes had a perfect 4.0 grade-point average for his first two semesters at the University of Mississippi.

For most college students, that accomplishment might typically be met with a polite shrug and congratulations. But, Hayes, of Saltillo, is no ordinary enrollee. He’s one of the youngest students in UM history, one of four 15-year-olds who were in the 2015 freshman class.

Hayes, who was homeschooled and graduated high school before enrolling at UM, commuted to UM each day like many students, but his mother drove him because he was too young to have a license.

The 16-year-old, who was classified as a sophomore by the end of his first semester, answered a few questions for the UM News blog about his experiences during his first year at the university.

Tell me how your first year as a young college student went. What were some of the challenges of it, but also some of the things you’ll always remember?
Hayes: I am happy to report that my first year went a lot better than I had expected, and against all odds, I maintained a 4.0 GPA through both semesters. I was homeschooled through high school, so it was definitely a big adjustment to go from a single teacher – who knew me very well – to a half-dozen different professors I had never met before, each with different preferences and a dizzying carousel of assignments and deadlines. The other students were used to having several different teachers in a school setting and managing the time spent on each assignment accordingly. I, on the other hand, was used to spending a lot of time on every project to ensure it was just right.

I’ll never forget agonizing over a term paper, working on it for two-and-a-half months, footnoting it extensively, editing the whole thing several times, even to the detriment of other subjects, only to find out that the other students in the class had spent an average of around a week on the same paper and did just as well.

How did you adjust to the grind of student life?
Hayes: I lived off-campus the entire semester, so I actually commuted around 45 minutes to an hour – one way – every day from my home near Tupelo. Needless to say, this put an extra squeeze on my time, so I was unable to really get involved in groups on campus. However, I did join the Model United Nations, which was a lot of fun.

How were you received by your professors and your fellow students?
Hayes: I was first worried that the other students – and even the professors – might look at me like I had two heads all the time. However, after a bit of initial shock and confused curiosity, I was generally accepted to be another (relatively) normal student. I remember, one of my friends was talking to me about a movie that she was going to see, and knowing that I was a movie buff, asked if I would like to go with her and some of her friends. Of course, I had to tell her at the time that I couldn’t drive myself. She looked at me confused for a second and then laughed and said, “Andrew, sometimes I forget how young you are.”

Talk about how the classes you took have shaped your path. A lot of times, college classes spark an interest in people and make them love something they study. Was there a moment where that happened for you?
Hayes: I can’t really say that I’ve had a “lightbulb” moment in any one of my classes. I came into college very interested in public policy and economics, and that hasn’t really changed, and I have really enjoyed the classes that I have taken in those subjects, so I think that those are still good areas for me to study.

What do your high school friends think about you being at UM?
Hayes: My friends think it’s really neat that I started college so early, but, unfortunately, all the time in Oxford has meant that I haven’t been able to spend much time with my old friends.

Have you made any decisions about continuing college and where you’ll go, what you’ll study?
Hayes: After Ole Miss (even though that’s three long years away), I would like to plow ahead and get a master’s and eventually a doctorate in economics. I haven’t thought much about where, but I’m attracted to Columbia and Princeton because of their strong economics programs. I would eventually like to get a job as a college professor or as an analyst for the government or a corporation.

What can you say about the quality of the education you’ve received here, as well as the experience of being on campus?
Hayes: The quality of education at Ole Miss has been very good. The professors I’ve had have all been encouraging and fair and very willing to help students excel. Even though it’s a big adjustment from homeschooling, I love coming to the campus and getting up every morning, even when the commute seemed long. Every one I’ve met has been really nice, and it’s easy to be comfortable and feel at-home on campus.

Tell me about how your parents have helped you through the process. Were they supportive of your idea to go to UM as a young teen?
Hayes: My parents have been really supportive of my early admission. Though they knew it was going to be tough, time-wise and academically, they both supported pursuing what was best for my education, and I’m definitely grateful to them.

Who are some of the professors that have influenced you and helped you learn? Talk about them and some of what they’ve done for you.
Hayes: Dr. David Gonzalez, my economics professor this past semester, was a great professor and helped me learn a lot in his class. Not only is he an economist, a career I aspire to, but he is also involved with the Croft Institute for International Studies, of which I am a part. He is also really helpful to students and once stayed past his usual office time to see me when I told him I couldn’t make his normal hours; not every professor is so generous with his time.

Dr. Enrique Cotelo was my first-semester Spanish professor and he really helped me, a person with very little Spanish experience, become someone who can go to a Spanish-speaking country confidently. He also made class exciting, challenging and fun, and did so without a trace of insincerity or arrogance. He also nominated me for a Spanish-language award and even met with me outside of the school year to practice Spanish with me and stay refreshed for the next semester. I consider him to not only be one of my favorite professors but a great friend whom I admire.

What is it about UM that drew you here? Did the experience meet your expectations?
Hayes: Two features were particularly attractive about Ole Miss. The first is that it is only an hour or so from where I live, so the commute was not terribly long. Also, both of my parents are Ole Miss alumni and that definitely helped them prepare me for the transition to college life. I had hoped that the people and instructors at Ole Miss would be friendly and encouraging, and that’s definitely been the case.

Will you continue with your studies at UM? How many credits have you earned so far?
Hayes: I hope to continue studying at Ole Miss for a couple more years (if they’ll have me) and graduate in three years. Including iStudy courses, CLEP tests and classes, I will start this fall with 55 credit hours logged.