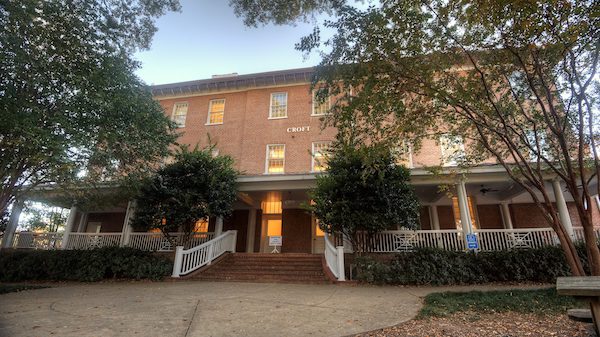 Since its first graduating class in 2001, 520 students have graduated from the Croft Institute for International Studies. Photo by Nathan Latil/Ole Miss Digital Imaging Services

Since its beginning in 1998, the Croft Institute for International Studies at the University of Mississippi has supplied students with the tools to become global citizens.

Chief among these tools are acquiring a high level of proficiency in a foreign language and studying abroad, for either a semester or a whole year, in a country whose language they have been studying.

Immersing oneself in the culture, history, language and day-to-day existence of a foreign land while studying abroad has proven to be a highlight of a student’s undergraduate career and aptly prepared Croft students for their future careers, either at home or elsewhere.

“Any study abroad experience gives the student a newfound appreciation for a different country and its culture,” said Oliver Dinius, Croft executive director and associate professor of history. “What is special about the semester or year abroad for Croft is that students will see firsthand how the language skill and the regional knowledge allow them to gain a much deeper understanding of their temporary home.

“It reinforces the hard work students have invested in the classroom during their first two years at Croft – and it adds that practical application that makes it all worthwhile. It provides the student with the confidence that she or he can actually do it: live and work in a different language and culture.”

As the institute celebrates its 20th anniversary this fall, it has sent hundreds of students to countries around the globe for their study abroad adventure. During the 2017-18 academic year, 43 Croft students studied abroad for either a semester or year.

Those students return to campus changed: more independent, more adept at tackling global challenges and more skilled at charting a career path in the world.

Dinius studied abroad twice: first as an exchange student from Germany at the University of Oregon and at Harvard University, where he earned his doctorate, and later when conducting 18 months of field research in Brazil.

Those diverse exploits helped him master foreign languages, be comfortable in different cultural environments and develop key skills to be a resident of the world.

Here are what a few current Croft students remember about their study abroad experience and how that time affected their lives. 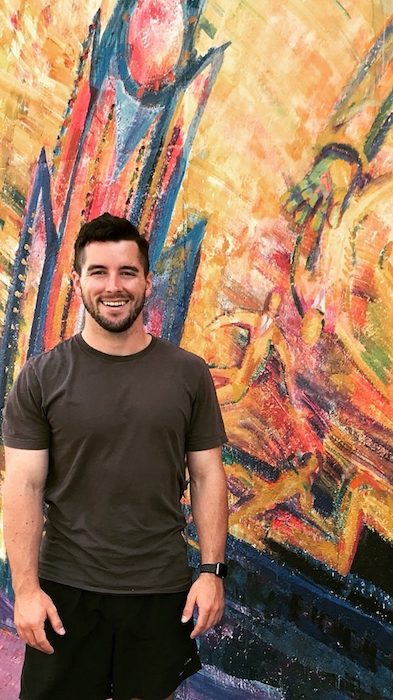 Zac Herring, a senior at the Croft Institute majoring in international studies, German and economics, visited the Berlin Wall during his studies this year at the University of Cologne in Germany. Submitted photo

Herring had heard that the study abroad experience is often called a unique semester in the life of a college student. After studying three months this spring at the University of Cologne in Cologne, Germany, Herring understands why.

“I had a wonderful and exciting time,” said Herring, from Olive Branch.

The international studies, German, and economics major studied German and participated in the Global Study Program, where he studied several different topics, most notably European Union economic law, EU development policy and the effect of globalization on European political discourse.

While his time abroad this spring helped with his language skills, he really discovered how to solve problems and address challenges he hadn’t faced in the U.S.

“You get to spend a great deal of time with people who are very different than you, and it really gives you a sense for how vast the world actually can be,” he said. “I think I have a much better understanding of what life is like in an entirely different political climate, with a radically different political history.”

Herring also offers some advice: “Make sure to find out as much as you can about what you need to do” before heading abroad, especially if you are responsible for your housing. 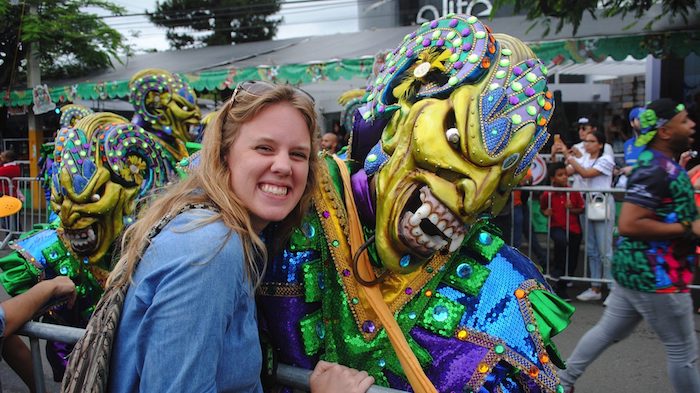 Senior international studies and Spanish major Caroline Bass spent the spring of 2018 studying in the Dominican Republic as part of her Croft Institute studies. Submitted photo

While there, she took a variety of literature and history classes for her major – with all of the classes in Spanish. In the streets of Santo Domingo and around the Caribbean country, Bass also said she heard very little English, so the experience greatly improved her language skills.

More learning came from outside of the classroom as Bass said the semester in the Dominican Republic made her “a more open-minded and curious student” that will affect how she studies and learns at UM.

“Living and studying in another country provides insight and perspective that you cannot attain in Oxford,” she said. “It showed me that there are countless things in the world that are more important than my life and ideas. It is a humbling experience that all students can benefit from and has given me a passion for the world, but has also given me a new understanding and love for Mississippi.”

“My study abroad experience was very meaningful and forced me out of my comfort zone. I met a lot of wonderful people and experienced new things that I never would have if I stayed in Oxford.”

How much does Burns enjoy studying abroad? Enough that the Gulfport native has made three separate study abroad trips. 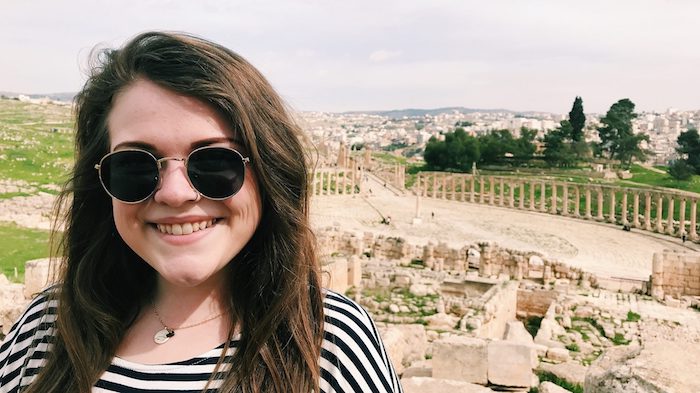 Croft Institute senior Lauren Burns has journeyed to Jordan three times for study abroad. Her trips have allowed her to immerse herself in Jordanian culture, including trips to places such as Jerash. Submitted photo

The international studies and Arabic major first studied at the Modern Arabic Language International Center in Amman, Jordan, in summer 2016 and then returned the following summer. This spring, she returned to Amman for an internship with CET Academic Programs, a study abroad organization.

“Besides the obvious benefit of improving my foreign language skills, I really got to immerse myself in Jordanian culture,” Burns said. “By living and studying there for a total of eight months over the past three years, I truly came to understand the phrase ‘you had to be there.’

“I’d read tons of articles and books for class about the refugee crises in the Middle East, but seeing the conflicts and their effects firsthand and befriending Syrian, Palestinian and Iraqi refugees really put things into perspective.”

Caple, an international studies and Chinese major minoring in environmental studies, also has made three study abroad trips – all to China. 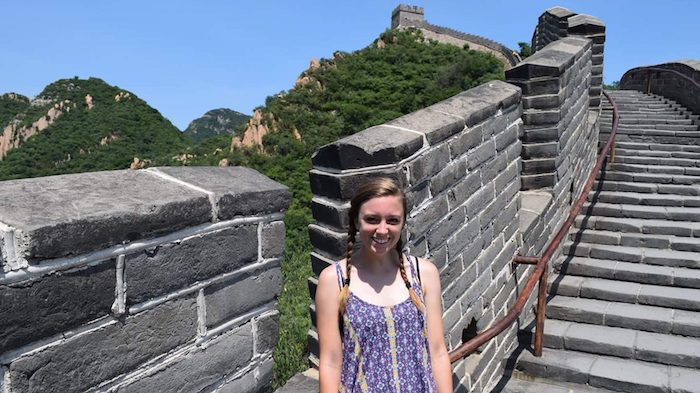 Senior Tyler Caple, an international studies and Chinese major minoring in environmental studies, has made three study abroad trips to China while a student at the Croft Institute. Submitted photo

The Huntsville, Alabama, native first studied abroad in Shanghai for an intensive language program in summer 2016. The following summer, she went to Changchun on a Critical Language Scholarship and took intensive Chinese classes again.

This past summer, she interned with a social enterprise called Women in Leadership League in Shanghai, thanks to a substantial grant from the Freeman Foundation in Stowe, Vermont.

With each trip, she was prepared because of her Croft studies.

“The Croft program does an amazing job of preparing students for study abroad,” she said. “Even before my first summer in China, I possessed a strong background knowledge of Chinese history and culture that helped me navigate potentially awkward conversations. Croft professors also encourage students to be constant learners, which inspired me to seek out opportunities to learn about my host country while abroad.”

As a three-time study abroad student, Caple has some simple advice for students – Croft or not – considering going abroad to study: Go for it.

“Even if you think it might not relate to your studies, go ahead and seek out information because you never know what kind of programs or interdisciplinary fields are out there,” she said.

“An amazing adventure” is how Cook, an international studies major minoring in sociology, describes her study abroad trip to Spain this June. 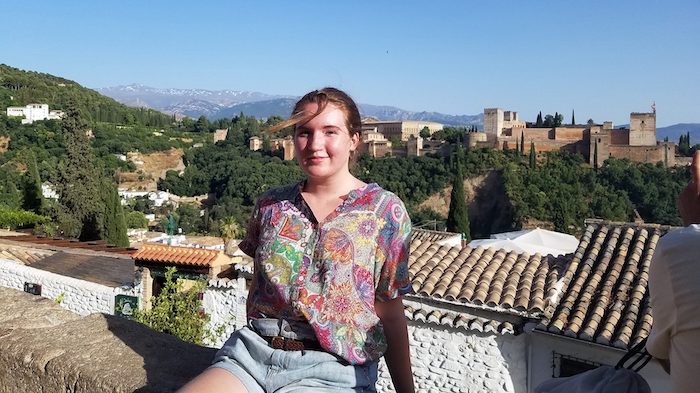 Cook, of Flowood, studied Spanish culture and history, and the Spanish language at Universidad de Alcalá in Alcalá de Henares, Spain, about 20 minutes outside Madrid.

The suburb was once a Roman settlement, then a prominent medieval town with a rich literary history. Now, it is “a bustling, working Spanish metropolis with a quaint old town and a lot of history,” she said.

“I learned an incredible amount in a city that really epitomized Spain as the intersection between ancient and modern,” said Cook, a 2017 Stamps Scholarship recipient.

Well-prepared for speaking Spanish because of her Croft studies, Cook said the experience of living in Spain for a month made her more confident in her Spanish-speaking ability.

“I understand that language learning comes in waves – some days were difficult just saying something nuanced while others were brilliant, and that’s something every language learner must remember and accept,” she said. “I was very lucky to have many, many kind strangers start conversations with me and give their time to me.

“It’s the interactions like this on a daily level, seeing how things work up close, that really fascinates and teaches.”

A native of Independence, Kentucky, Pfaehler did not have the typical study abroad experience.

Thanks to a substantial grant from the Freeman Foundation in Stowe, Vermont, Pfaehler spent June and July of this year not studying at a university, but at the Vietnam National Children’s Hospital in Hanoi. 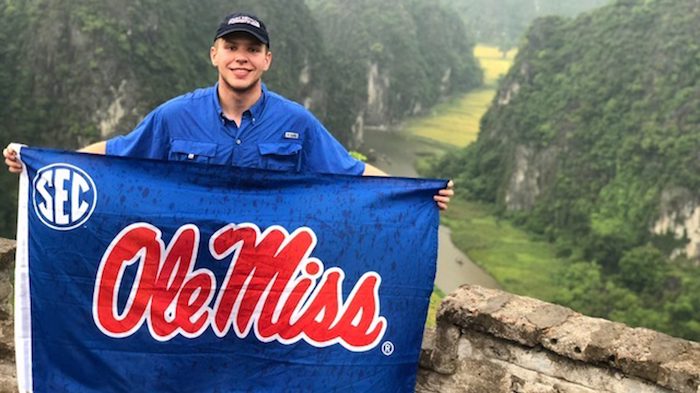 A recipient of a Freeman Foundation grant, David Pfaehler visits a mountain in the Ninh Binh Province, about an hour south of Hanoi, while interning this summer at the Vietnam National Children’s Hospital as part of his Croft Institute study abroad experience. Submitted photo

“I observed surgery and studied congenital anomalies in three different departments: plastic and craniofacial surgery, cardiovascular surgery and orthopedic surgery,” said Pfaehler, who is majoring in international studies and French along with minors in Spanish and chemistry.

Pfaehler spent about 45 hours a week shadowing and assisting doctors at the hospital.

“I thoroughly enjoyed my time in Vietnam and I believe that the Croft Institute prepared me for this experience by opening my mind to trying different things, whether it be learning new languages, talking to complete strangers or exploring the lesser-known parts of the world,” he said.

The trip was a motivating and humbling experience, one that reminded him that “there are still so many differences to be made in this world to make life easier and happier for all people.”

“My internship in Vietnam expanded my knowledge and love for medicine, allowing me to make a difference in the lives of young children born into very disadvantaged situations,” he said.

Wang, a native of Randolph, New Jersey, has enjoyed her study abroad experiences so much that she is still overseas, studying at Al Akhawayn University in Ifrane, Morocco, this semester.

Her latest studies are part of a whirlwind study abroad journey that started in Meknes, Morocco, at the Arab American Language Institute studying intensive Arabic in summer 2017. 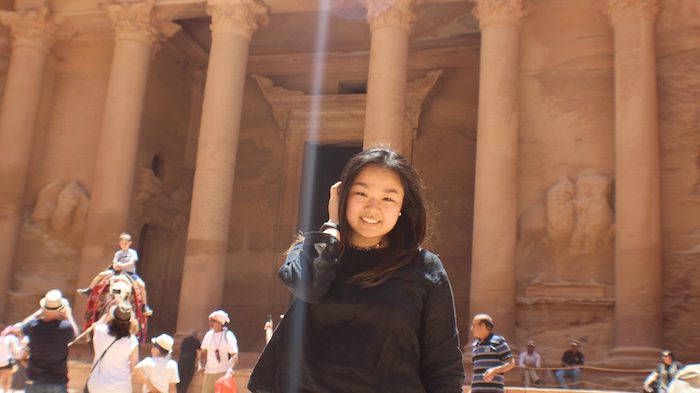 Emily Wang, a junior in the Croft Institute, visits the ancient city of Petra while completing an intensive language institute program in Amman, Jordan, this summer. Submitted photo

After a year at UM, this summer she completed an intensive language institute program with the U.S. Department of State Critical Language Scholarship Program in Amman, Jordan. She also briefly studied Moroccan Arabic dialect in Rabat, Morocco, before starting her fall at Al Akhawayn University.

“The Croft Institute has afforded me incomparable opportunities to accumulate exposure, appreciation and understanding in unfamiliar cultural contexts,” said Wang, an international studies, Chinese and Arabic major. She also is pre-medicine, minoring in chemistry.

“Through close collaborations with the UM’s intensive Chinese and Arabic programs, Croft has been able to offer me an extraordinary program to holistically study the world,” she said.

For the last 20 years, Croft students have had opportunities to experience a foreign culture during their semester or year abroad. With the institute’s 21st academic year underway, another cohort of Croft students will be heading abroad, and while they may go to the same countries and programs as in years past, the individual experience always will be unique.