Grateful recipients ready for graduation and chance to change the world 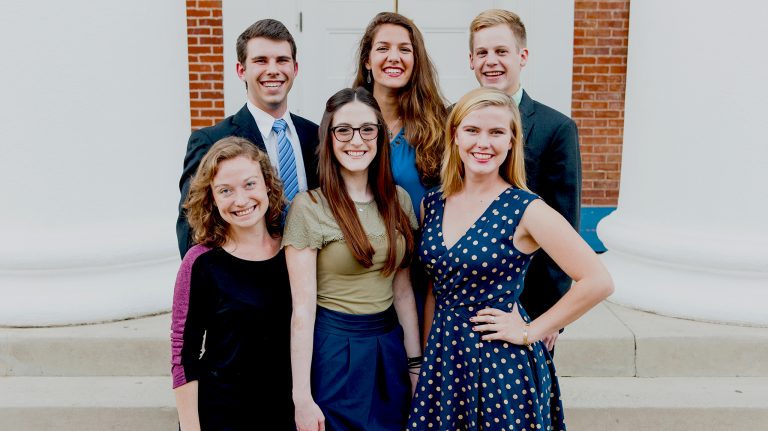 The university’s inaugural Stamps Scholars recently gathered to re-create their class photo from four years ago. They are (front, from left) Madeleine Achgill, Kate Prendergrast and Eloise Tyner, and (back, from left) Dylan Ritter, Kathryn James and Ben Branson. Photo by Bill Dabney

Four seniors graduating Saturday (May 13) from the University of Mississippi have the distinction of being among the first six UM students to have benefitted from the prestigious Stamps Scholars program.

Funded by the Stamps Family Charitable Foundation, the awards are the university’s most comprehensive, full scholarship packages for in-state and out-of-state students. Each package covers the full cost of attendance, along with a generous stipend for unique educational pursuits, including study abroad, research internships and academic conferences.

The two other inaugural Stamps Scholars will receive UM degrees at later dates. They are Kate Louise Prendergast, a psychology and theater arts major from Luling, Louisiana, on track to graduate in December; and Benjamin Carter Branson, a mechanical engineering major from Madison scheduled to graduate in spring 2018. All six are members of the Sally McDonnell Barksdale Honors College.

“Our first generation of Stamps Scholars has set a high bar with their scholastic achievements and their ethic of excellence,” said Douglass Sullivan-Gonzalez, dean of the Honors College. “They created a spirit of collegiality and they pushed each other to excel, to imagine and to push through to the conclusion. We could not be luckier to have landed such an outstanding group for our first cohort of Stamps Scholars.”

“With the graduation of our inaugural cohort of Stamps Scholars, we are so pleased to be seeing the first fruition of our tremendous partnership with the Stamps Family Charitable Foundation,” Vitter said. “These gifted, talented students have spent the last four years leaving their mark of excellence on our campus and in our community.

“We are proud to call them Ole Miss Rebels and send them out into the world so that they can continue to impact lives and communities, from across the street to around the globe.”

Grateful and optimistic, each of the scholars reflected upon his/her most memorable experience and shared future plans.

Achgill came to UM to become fluent in two foreign languages by the time she graduated college. Her Spanish and Chinese scores show that she is highly professionally proficient in both languages.

The university’s 18th David L. Boren Scholar, Achgill will attend Nanjing University in China this fall, followed by an internship in a Tier 1 city next spring. Due to Capstone and Boren requirements that she remain a degree-seeking student until the completion of her China program, Achgill will not receive her diploma until August 2018.

“Because of my interests in China and Latin America relations, I’m hoping to intern with a Chinese company with business, cultural or research ties to Latin America,” she said. “After the year in China, I hope to fulfill the Boren federal government service requirement through a job that combines my interests, perhaps through the Bureau of Educational and Cultural Affairs.” 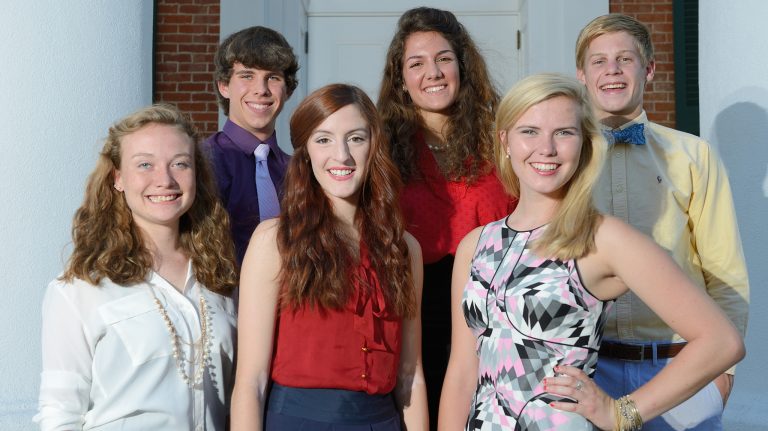 James said she found her niche in education while teaching with the Sunflower County Freedom Project in the Mississippi Delta. Her plans are to ultimately work in education policy, deconstructing opportunity gaps so that all students are equipped to achieve.

“My most transformative moments in college – working for a Mississippi First, Mississippi’s leading education advocacy group, teaching at a nonprofit in the Delta, experiencing public conceptions of religion in Europe and traveling through eastern and southeastern Asia – have all been supported by the Stamps enrichment fund,” said James, who will join the Mississippi Teachers Corps this fall as part of requirements for a UM master’s degree in curriculum and instruction.

“Attending Ole Miss, and having the flexibility Stamps provides, has been absolutely pivotal to my career path. I came to UM planning to work in international development, but quickly learned about the educational inequity present in Mississippi, which led me to learn about opportunity and achievement gaps in this and every state.”

Since enrolling at UM, Ritter has spent summers conducting research at both Texas A&M University and in Ireland for five weeks at a pharmaceutical lab, where his performance earned an opportunity to perform independent research for the multinational company. He worked last summer in a lab associated with the University of California at Davis that integrated his earlier research from Texas A&M.

“Getting to travel to Texas A&M during my freshman and sophomore summers gave me a great chance to see a new career path in the sciences,” he said. “During those summers, I realized how much I enjoyed research.

“The experience was so rewarding and fulfilling that it shifted my post-undergraduate plans from medical school to graduate school.”

Ritter’s post-graduation plans include going to Ireland to visit a host family from high school and to travel around.

“The Stamps Scholarship has given me the financial freedom to plan trips like this in order to see new perspectives in the world and learn about different ways of living,” he said. “Long term, I will be going to Vanderbilt University for a Ph.D. in the biomedical sciences as part of their interdisciplinary graduate program.”

Tyner’s service projects have included a Cherokee mission trip and work with the Oxford Food Pantry and Operation Christmas Child.

“I spent four months in Amman, Jordan, working on proficiency in Arabic and returned for an action-packed summer with the Sunflower County Freedom Project in Mississippi,” Tyner said. “My time abroad and work in the state enabled me to pursue my thesis interest in racial reconciliation.”

Prendergast said her most fulfilling experience as a Stamps Scholar has been serving on the leadership team at the Ole Miss Wesley Foundation, the campus ministry of the United Methodist Church.

“The Stamps Scholarship has afforded me the opportunity to engage in clinical psychology research at Ole Miss, focusing generally on the mechanisms of anxiety and disgust reduction, and the presentation of psychiatric symptoms in pregnant women,” she said. “These experiences have led to my passion and excitement to work in this field and tap into the resources it offers for improving mental health care.”

Prendergast’s short-term plans include conducting research with a clinical psychologist at the University of Hawaii this summer, working at a mental health clinic and applying for doctoral programs in clinical psychology. Her long-term plan is to complete a Ph.D. and work in a university medical center where she can research, teach and see patients.

A student in the Haley Barbour Center for Manufacturing Excellence, Branson led a Capstone design team throughout the year designing, prototyping and manufacturing wooden sunglasses. He continued his work with Outward Bound during a January expedition in the Florida Keys.

“This summer, I will be leading sailing expeditions in coastal Maine for (Hurricane Island Outward Bound School) and performing thesis research there as well,” Branson said. “For my thesis, I’m thinking of taking what we learn in the CME about efficiency and manufacturing and organization and applying it to the sailing base, to see if I can’t make it more efficient and easier to understand.”

The partnership with the Stamps Family Charitable Foundation was established in 2012, when UM alumnus William Dunlap of McLean, Virginia, brought his alma mater to the Stamps family’s attention. After reviewing a proposal, the foundation chose to partner with the university.

For 2016-17, 12 incoming UM freshmen were selected as Stamps scholars, making the university one of only four to award more than 10 Stamps Scholarships to incoming students.

“We couldn’t be more proud of our first class of graduating Stamps Scholars at Ole Miss,” said Roe Stamps, founder of the Stamps Family Charitable Foundation. “These amazing young men and women have proven to be well-equipped to continue making a positive impact in their communities and abroad, and I am confident they will achieve true greatness as Stamps Scholar alumni.”

The foundation supports more than 400 Stamps Scholars through partnerships at more than 40 outstanding universities and colleges. As one of the country’s most prestigious awards for high school seniors, the Stamps Scholarship typically provides four years of generous support, with additional funding available for enrichment experiences.

The awards are made on the basis of leadership, scholarship, perseverance, innovation and service.